The Lone Cat of the Camp 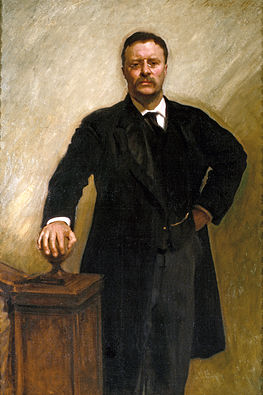 When we shifted camp we came down here and found a funny little wooden shanty, put up by some people who now and then come out here and sleep in it when they fish or shoot. The only living thing around it was a pussy-cat. She was most friendly and pleasant, and we found that she had been living here for two years. When people were in the neighborhood, she would take what scraps she could get, but the rest of the time she would catch her own game for herself. She was pretty thin when we came, and has already fattened visibly. She was not in the least disconcerted by the appearance of the hounds, and none of them paid the slightest attention to her when she wandered about among them. We are camped on the edge of a lake. This morning before breakfast I had a good swim in it, the water being warmer than the air, and this evening I rowed on it in the moonlight. Every night we hear the great owls hoot and laugh in uncanny fashion.

The human race can be roughly divided into two categories: ailurophiles and ailurophobes - cat lovers and the underprivileged. ― David Taylor